The waste sector sees opportunities for CO₂ capture and reuse. Carbon dioxide is a useful raw material, particularly in greenhouse horticulture. The waste industry and the greenhouse horticulture sector are working together to save two megatonnes of CO₂. To complete the business case, the government will have to provide an incentive package.

In its coalition agreement the Rutte III government announced an ambitious target for reducing CO₂ emissions: a 49% reduction by 2030 on 1990 levels. The government's plans rely heavily on CO₂ capture and underground storage, but the waste sector prefers a more sustainable route involving CO₂ capture and reuse, turning CO₂ into a usable raw material. This is more suited to a circular economy. Customers have already been found, including greenhouse growers, who use the gas to stimulate crop growth. The greenhouse horticulture sector can take about two megatonnes of liquid CO₂ each year. 'The greenhouse horticulture sector is keen to become more sustainable,' says Dennis Medema, innovation specialist at LTO Glaskracht (a Dutch industry organisation for greenhouse horticulture). 'Growers burn natural gas to produce CO₂, even when it's warm outside and the vents are open. So there is great potential for savings and the growers are very much aware of that too.'

"Waste companies work around the clock and so they can provide a constant supply." 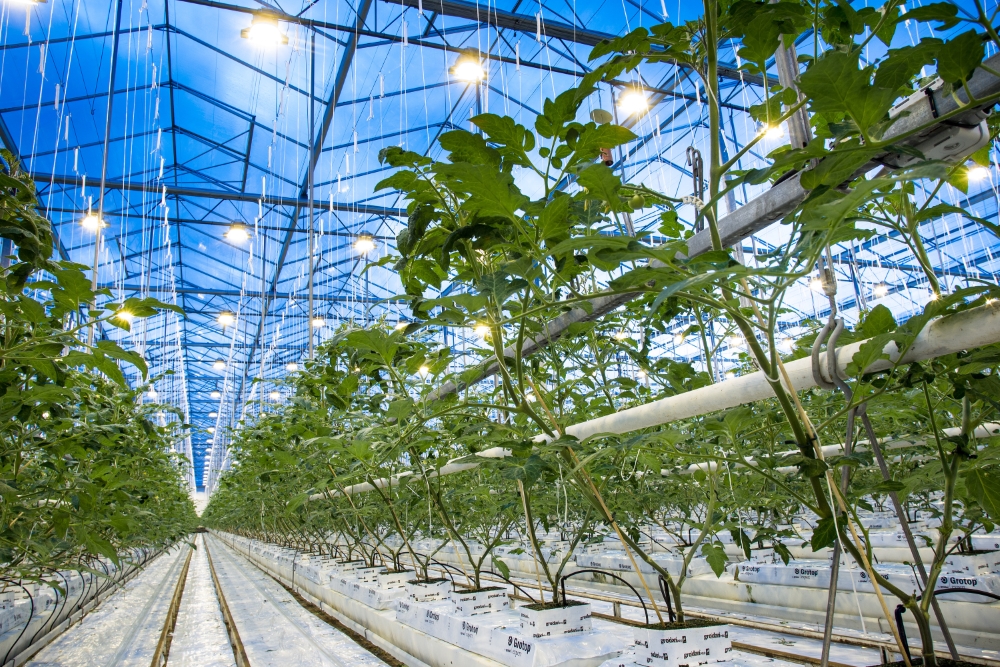 The waste sector is focusing on cooperation with greenhouse horticulture

Shell Pernis and Alco Energy Rotterdam are already capturing half a megatonne of CO₂ each year and delivering it to the nearby Westland greenhouse horticulture complex via the OCAP pipeline. Medema: 'We are keen to obtain the remaining 1.5 megatonnes from the waste companies. They work around the clock and can provide a constant supply, which is very important for maintaining the correct dosages in the greenhouses.' For the growers it is an advantage that 64% of the CO₂ from the waste sector is not fossil carbon, but of biogenic origin. 'We prefer CO₂ of biogenic origin. The biogenic fraction makes CO₂ from waste processing companies more sustainable and therefore more interesting,' adds Medema.

"By supporting growers in their transition to a sustainable heat supply we will be able to make significant CO2 emissions reductions."

Technically speaking, much is already feasible, says Michiel Timmerije, director of Energy & Residues at AVR. 'Studies show that CO₂ is a useful raw material, not only for greenhouse horticulture, but also for cement production and in the chemical industry, for example as a feedstock for new plastics. A number of developments are paving the way towards a CO₂ economy in which CO2 is reused as a raw material. We can capture CO₂ released in our waste-to-energy (WtE) plants and liquefy it. The WtE plants process about 7.8 million tonnes of combustible residual waste each year. A tonne of waste produces about a tonne of CO₂. Almost two-thirds of this is of biogenic origin and is therefore sustainable.'

"Technically speaking, we can already do a lot with CO2 and there are more than enough ideas and enthusiastic people."

CO₂ as a raw material for chemicals

SUEZ is also working on CO₂ capture and reuse, with a potential production capacity of 350-400 kilotonnes per year. 'We are initially looking to exploit opportunities for cooperating with and supplying to the chemical industry,' says Reinier van Wijck, ReEnergy operations manager at SUEZ. 'In combination with hydrogen production it is possible to produce methanol and that is the basic raw material for the chemical industry. From CO₂ you can also produce formic acid, for example. This has many applications, including as a fuel for cars, which can be an alternative to hydrogen.' The opportunities are illustrated by a pilot project in Eindhoven, where a city bus has been running on formic acid since 2017. Van Wijck: 'Technically speaking, we can already do a lot with CO₂, and there are more than enough ideas and enthusiastic people. We must now take the step from the laboratory to pilot projects - and of course, create a sound financial basis for the business case.'

The sector is focusing on cooperation with greenhouse horticulture, a proven use for captured CO₂. Timmerije: 'By supporting growers in their transition to a sustainable heat supply we will be able to make significant CO₂ emissions reductions. The greenhouse horticulture sector can use about two megatonnes of CO₂ each year and supplying this CO₂ adds a circular dimension to the WtE market. However, the real sustainability impact will come from a combination of CO2 supply and sustainably generated heat. With the growers we will then be killing two birds with one stone.'
A few WtE plants are developing plans to recover pure CO₂ from their flue gases. AEB and HVC have signed a Green Deal with the government on supplying CO₂ to commercial greenhouses in the province of Noord-Holland. In a demonstration project HVC is currently installing a 4 kilotonne CO₂ capture installation in its Alkmaar bio-energy plant. It is the first step towards the construction of a larger capture facility. In spring 2018 AVR started building a large-scale CO₂ capture installation in Duiven which will supply 60,000 tonnes of liquid CO₂.

"Twence hopes to make an investment decision on a CO2 supply project in 2018."

Twence also hopes to make an investment decision on a CO₂ supply project in 2018, but this depends on whether or not the waste processer and energy producer can come to a financial arrangement with the government. Twence director Marc Kapteijn looks primarily to the chemical sector. Since 2014 Twence has been capturing about 3,000 tonnes of CO₂ each year for the production of sodium bicarbonate, which the company uses in the flue gas cleaning systems for its own WtE plants. 'But when it's for external projects, everyone struggles with irrecoverable development costs,' says Kapteijn. 'We can recover the variable costs, but not all of the investment costs.'
Independent research shows that the investments needed to ensure substantial CO₂ reductions cannot be borne by the waste sector alone. Both the carbon capture technology and the transport infrastructure from source to user require a considerable financial injection. Given the high cost of the infrastructure, it makes sense to look for potential customers near waste processing facilities. 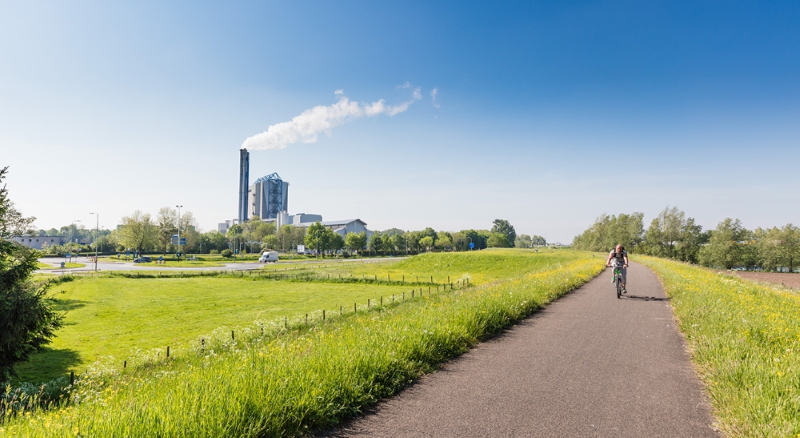 To complete the business case, the government will need to provide an incentive package

Kapteijn: 'We are already holding exploratory talks with the Ministry of Economic Affairs and Climate Policy. This is a strategic portfolio for the waste sector, but the government also has an interest as it is still a long way off its stated target for 2030.' Whether the government support is in the form of an investment grant or a payment per tonne of CO₂ captured is of secondary concern to the sector. 'You could also consider broadening the SDE+ sustainable energy incentive scheme to include CO₂ capture,' suggests Kapteijn.

Clearly, the potential market for CO₂ will have to be broader than just greenhouse horticulture. The demand from growers, two megatonnes, is limited and varies according to the season. 'As an industry we have a good reputation for greening our processes,' states Timmerije. 'There is a will, and cleaning flue gases is one of our core activities. Cooperation with the greenhouse horticulture sector can be a catalyst for other CO₂ projects.'

Reusing CO₂ is not new to the waste sector. Next to the use of CO₂ in Twence's own WtE flue gas treatment facility, other examples include the production of liquid CO₂ from the anaerobic digestion of green waste by Indaver, ARN and Attero. The biogas produced during the digestion process is a mixture of CO₂ and methane. This is fed into a sophisticated plant that turns it into liquid CO₂, which is sold to greenhouse growers or converted into dry ice as coolant for use in the transport sector. Slibverwerking Noord-Brabant (SNB) in Moerdijk, a company that incinerates sewage sludge, has been recovering CO₂ from its flue gases for more than ten years and supplies this CO₂ to OMYA, which uses CO₂ as a raw material for producing calcium carbonate. This exchange project is helping to build a sustainable industrial economy in the Port of Moerdijk business park.