The case for transnational carbon reduction

The European waste sector makes a substantial contribution towards meeting European climate targets. Two renowned research consultancies recently calculated that by 2035 the sector could deliver a carbon reduction of no less than 150 million tonnes of CO₂ equivalents. Realising this potential will require full implementation of existing EU legislation. With a more ambitious package, the EU could almost double this reduction. The waste sector is ready to take up this climate challenge, along with European governments, waste companies, manufacturers and all Europeans.

The European waste sector is virtually climate neutral. If Europe meets its waste management targets for 2035, the sector’s net carbon emissions will be considerably less than zero. The carbon reduction potential of the sector is immense. ‘Annual carbon emissions can down by 150 million tonnes in 2035,’ says researcher Bärbel Birnstengel of research consultants Prognos. In a study with CE Delft for four European waste management associations (see box) Prognos calculated the potential carbon reductions that can be made by the European waste sector. 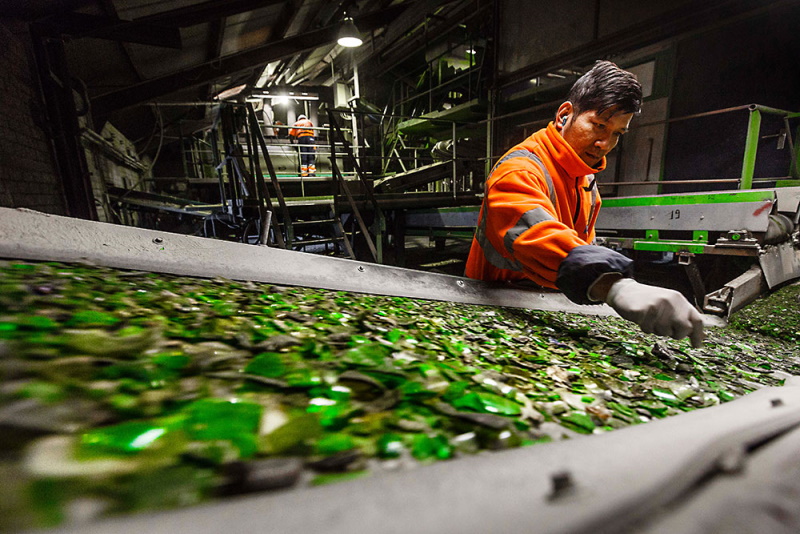 The study of the climate potential of the European waste sector investigated ten waste streams: paper, glass, plastic, ferrous metals, aluminium, wood, textiles, tyres, bio-organic waste and residual waste/refuse derived fuel. Together they account for almost a fifth of the total waste stream. Prognos and CE Delft carried out the study for the European Waste Management Association, the RDF Industry Group and the Dutch Waste Management Association. Two scenarios were investigated for the 27 member states of the European Union and the United Kingdom: implementation of the current EU waste and recycling targets and a package of more ambitious targets. The baseline year was 2018. The first scenario assumes that the 65% recycling target for 2035 applies also to commercial waste.

The European waste sector cannot achieve this 150 million tonne carbon reduction on its own. ‘This scenario assumes full implementation of the current EU legislation,’ says Birnstengel. What she is referring to here are the EU waste targets of 65% recycling of municipal waste, 70% recycling of packaging waste and maximum 10% landfilling. By meeting these targets the European waste sector will make a substantial contribution to meeting European climate targets. To put this reduction into perspective, it is equivalent to almost half of Spain’s carbon emissions in 2019.

In a second scenario, the EU takes an ambitious step forward. This scenario assumes – in addition to the measures in the first scenario – higher recycling targets and no landfilling of recyclable and combustible waste. ‘In 2035 these measures will deliver a carbon reduction of 296 million tonnes compared with 2018, almost double that in the first scenario,’ says the researcher. But, she stresses, ‘waste is at the end of the value chain. To achieve these results we need to work with all stakeholders, including product designers and manufacturers at the beginning of the chain.’

‘Annual carbon emissions from the European waste sector can be down by 150 million tonnes in 2035.’

The recycling targets in the two scenarios imply a major recycling effort by the member states and achieving them will require an expansion of European recycling capacity. FEAD chair Peter Kurth: ‘The entire waste management chain is committed to increasing investments and performance to fully contribute to CO2 savings.’ He sees a direct link between European waste and climate policies. ‘The European Union has set Europe on course to carbon neutrality by 2050. The European waste sector plays a pivotal role in realising this climate ambition and is making a contribution towards meeting the Paris Climate Agreement.’ To exploit the sector’s carbon reduction potential, he says, the EU and the member states will have to introduce a raft of new measures, such as mandatory recycling percentages for raw materials in manufacturing, efficiency rules for European waste transport and government support for separate collection.

‘The European waste sector has a central role to play in the European Union’s climate ambitions.’ 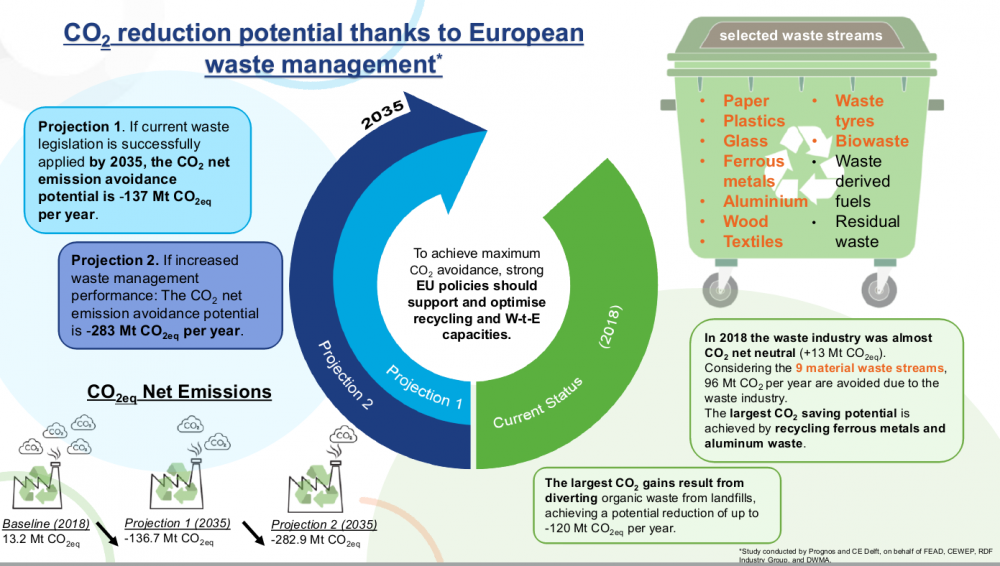 The Netherlands to raise its game

Andreas Krawczik is managing director of REMONDIS Nederland and as board member for European Affairs at the Dutch Waste Management Association (DWMA) he represents the Dutch waste sector in the European Waste Management Association. Krawczik is enthusiastic about the study results. ‘The potential for reducing carbon emissions is impressive. If all the member states pursued more efficient waste management as a common objective, the sector as a whole would make huge strides in carbon reduction.’ The Netherlands too must raise its game. It recycles about half of its municipal waste, while the EU target is 65%. ‘The challenge facing the Dutch waste sector is to recycle an additional million tonnes of waste. We have everything in place needed to collect, sort and recycle this stream.’

Krawczik takes the message a step further, emphasising the importance of transnational carbon reduction. ‘We must take a Europe-wide approach to reducing carbon emissions. If we share the waste-to-energy capacity in Europe we can use it to the full and prevent recyclable and combustible waste from going to landfill. Countries would then import foreign waste that would otherwise be landfilled, sort it, recycle some of it and incinerate the rest with energy recovery. With European cooperation like this we can help to reduce total European carbon emissions.’ Carbon emissions from waste transport are not a significant factor in this calculation. The researchers calculated how much CO2 is emitted by an average medium-sized waste transport vehicle and found that even when transported 9,000 kilometres, incinerating waste with energy recovery still produces fewer emissions than landfilling it.

‘We must take a Europe-wide approach to reducing carbon emissions.’

Krawczik argues for more European cooperation. ‘We need each other. Governments and businesses need to work together to realise this carbon reduction potential. European policy must set its sights on integrated waste management to enable more recycling and energy recovery from waste,’ he says. Cooperation can take the form of treating waste in the most efficient way possible and by sharing knowledge and waste management capacity.

Landfilling municipal waste remains popular in eastern and southern parts of Europe. In 2018 almost a quarter of all municipal waste produced in the European Union was landfilled. The study shows that the biggest emission reductions can be obtained by reducing the landfilling of paper and organic waste streams. Bärbel Birnstengel: ‘By looking ahead not just 20 years but also 100 years, the study was able to reveal the huge influence of methane emissions from these streams.’ It is therefore particularly important to reduce landfilling of recyclable and combustible waste in Europe.

Krawczik calls on the Dutch government to encourage ‘transnational carbon reduction’, for example by abolishing the import tax on combustible waste. ‘This would make it more interesting for countries like the United Kingdom and Italy to choose to incinerate residual waste abroad instead of landfilling it in their own country. Also, the resulting carbon reductions should be allocated to the Dutch Pollutant Release and Transfer Register and the emissions allocated to the country of origin. Effective European cooperation will not be possible without this approach and we as a sector will make a strong case for this in Europe.’

Link with the recovery fund

Krawczik also argues for a link with the EU recovery fund to support quicker implementation of the EU waste rules. ‘Many countries will have to invest heavily just to comply with and implement the current EU waste legislation. Implementation will involve jobs, considerable carbon reductions and raw materials extraction, all of which are highly relevant for Europe.’ 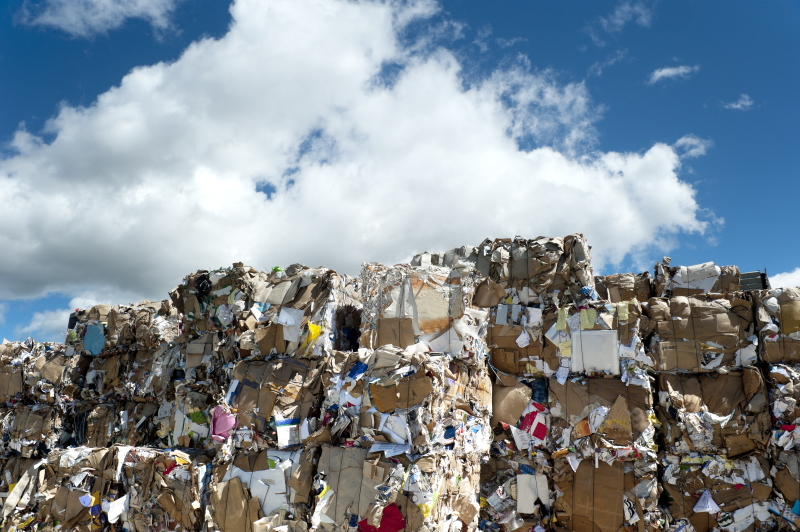